Home » Entertainment » Upcoming Animated Movies to Watch in 2022 [With Trailer]
Posted in Movies | Published on February 4, 2022 by Editorial Staff 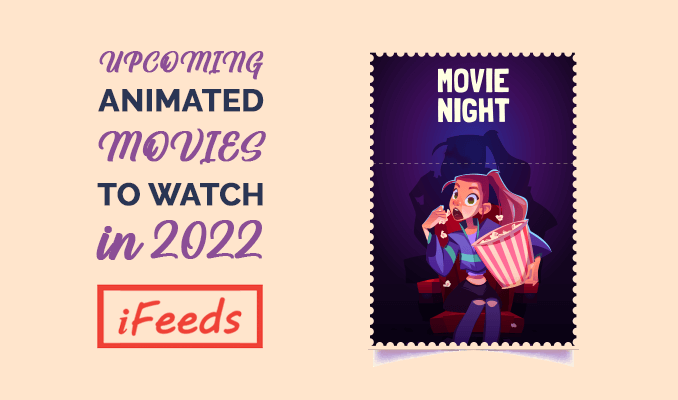 Animated movies are ageless. From toddlers to adults, everyone gets to laugh out loud. And with modern rich animation, new movies are more fun to watch.

To everyone’s delight, 2022 is welcoming a ton of Animated Movies. Some of them are sequels and some are new.

A few would release on the big screen and the others on your favorite OTT platforms.

So if you want to make your kids and your heart happy, here’s a list of animated movies releasing this year.

What fun would it be to watch a 13-year-old girl turning into a red panda when she’s overexcited?

Meilin Lee is confused between being her mom’s attentive daughter and the chaotic world of adolescence.  She discovers a secret of her turning into a panda and it’s hilarious to watch her journey.

Originally planned for the big screen. Turning Red might release on Disney+ On 11th March 2022.

Minions: The Rise of Gru

Who doesn’t love Minions? The cute creatures are coming to meet us on 1st July 2022. The Rise of Gru will follow the 2015 minions movie.

The action/comedy movie is about a 12-year-old boy and his dream to become the powerful supervillain of all time.

Directed by Kyle Balda, the film will have all the minions from previous movies. Steve Carell will be playing the Gru.

After gaining popularity among kids, Sonic is ready to speed again. The sequel of the 2020 film is releasing this April.

The trailer shares glimpse of Sonic’s new adventure and of course, Tails and Knuckles as well. In addition, the movie will have loads of references about the game of the same name.

Along with Turning Red, Pixar is releasing another movie this year. Sci-fi fiction Lightyear is all set to release on the 17th of June 2022.

Directed by Angus MacLane, the movie will explore the story of Buzz Lightyear from Toy Story.  Buzz will be played by Chris Evans

We will see the origin story of Buzz and how he became the space ranger.

It’s official. Super Mario Bros will be released on 21 December 2022. Almost everyone knows and loves Mario. Most of us grew up playing the game.

And now, Mario would meet us with Chris Pratt’s voice. The story would be similar to the game. Mario and his brother Luigi would find and save the captured princess.

Hotel Transylvania: Transformania is going to be the first animated release of the year on 14th Jan. After chaotic fun three movies, this one would be the finale of the franchise.

In order to prove his worth, Johny(Mavis’s husband) uses Van Helsing’s invention. That turns Johny into a monster and Drac and others into humans.

Now they all have to restore back to their original form before it gets out of hand.

Puss in Boots: The Last Wis

The 2011 film Puss in Boots, the prequel to the Shrek Franchise is ready for the second part.

During his adventure, Puss discovers that he is left with only one life out of nine. And now he is set to restore his lost lives.

The Ice Age has been ruling everyone’s hearts since 2002. The movie quickly gained popularity among kids and adults.

After five successful movies along with video games, the sixth part will release on 28th January 2022.

Originally, this was going to be a TV series focusing on Buck. Later the show got redesigned into a movie.

The movie will show us the adventure of Buck, Eddie, and Crash into the dinosaur world.

DC Comic character Catwoman is coming to meet us on February 8. The Movie is an anime-style adaptation of Catwoman.

The greatest thief, Catwoman, tries to steal a jewel and gets in a rivalry-adventure with villains, Interpol, and none other than Batwoman.

It’ll be a fun heist. Elizabeth Gillies is playing the role of the Catwoman and she’s purr-fect.

Disney would be bringing the second part of Diary of a Wimpy Kid for us. The 2021 animated movie was adored by many.

Now, Greg is in a new school year. And he has to put up with his brother Rodrick teasing him all the time. Otherwise, his secret might be ruined.

This new middle school, coming of age story will come out anytime this year. Keep an eye on the confirmed date, it’ll be declared soon.

Pinocchio is an upcoming live-action, animated adaptation of a 1940 film of the same name. Disney+ is relaunching the newer version for us to enjoy.

It will be a rather darker version of the popular wooden puppet turning into a human boy. Robert Zemeckis would be directing the film written by  Chris Weitz.

As of now, we don’t know the final release date. But it’s expected to be here in fall 2022.

Rise of the Teenage Mutant Ninja Turtles: The Movie

This year, Netflix is hosting Ninja Turtle’s movie. The movie is based on Nickelodeon’s TV series of the same name.

In 2019, Nickelodeon confirmed the Netflix release of TMNT. The synopsis wasn’t released until 2021.

So far, the storyline talks about mysterious strangers coming from the future with a dire warning. Now Leo and his brothers have to save the world from aliens.

The final release date would be confirmed soon.

To all the anime fans out there, don’t forget to watch Catwoman.

The year has loads of shows outlined for the kids and of course, for kids inside adults.

Watch out for confirmed release dates and plan your weekend. Laugh out loud with your favorite animated characters.