Home » Entertainment » Upcoming Marvel Movies in 2022 and Beyond (With Release Date)
Posted in Movies | Published on January 12, 2022 by Editorial Staff 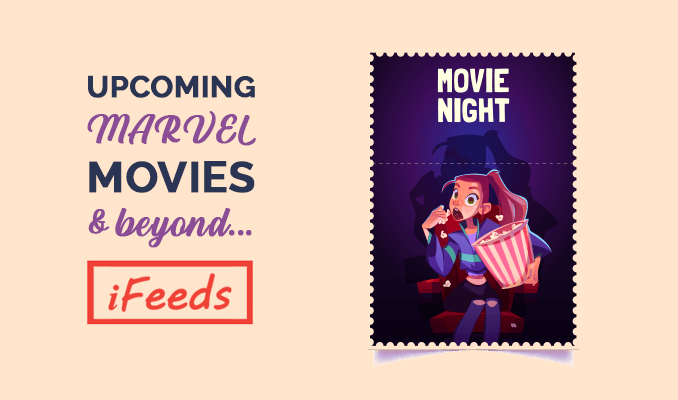 The Multiverse is officially opened up.

And our beloved Marvel has big things planned for the fourth phase. The coming years are going to be fantastic.

You must have already found out the answer to whether Tobey Maguire and Andrew Garfield are in Spiderman No way Home or not? The movie made 2021 worth it. Not to mention the post-credit scene foreshadowing Doctor Strange’s next movie.

In 2021, Marvel also released a few Hotstar sitcoms that are going to play a big part in phase four.

And now, as the new year begins, here is a list of Upcoming Marvel Movies to look forward to.

Upcoming Marvel Movies in 2022 and Beyond

Sony is introducing a new Spider-Man villain alongside Venom into the storyline. Yes, Morbius, a character based on Marvel comics would hit the big screen on Jan 2022.

Michael Morbius, a doctor, tries to cure his rare blood condition but ends up turning into a vampire.

The trailer of the movie drops a ton of easter eggs about Spiderman Universe. There’s also a teeny tiny clue referring to Black Cat, another spiderman villain.

The movie could be tied with Andrew Garfield’s Amazing Spiderman Universe. However, the trailer also has a poster of Tobey Maguire’s Spider Suit. And, the trailer shows Michael Keaton who played Adrian Toomes, The Vulture, in Spiderman homecoming.

So, this movie could be another crossover between Sony and MCU.

Doctor Strange In The Multiverse Of Madness – May 6, 2022

Marvel’s sitcom Wanda Vision’s post-credits scene showed Scarlet Witch reading a Book Of The Damned. Evidently, she would be playing a big part in Doctor Strange to unfold Multiverse.

The trailer shows a dark and evil version of Doctor Strange. So he could be the villain of the story.

The Asgardian hero returns with his fourth solo movie in the MCU. Thor, the god of thunder would introduce us to a new superhero.

That’s right, Thor’s love interest Jane Foster is going to pick up the Mjolnir to become the female version of Thor. And of course, we would get to see Valkyrie again.

The movie is said to resume the storyline after Avengers: Endgame and Thor would be in search of a new purpose.

Thor is the first MCU superhero to get a fourth solo film. And no doubt, it would be as fantastic as the previous three.

Who wouldn’t want to meet the King Of Wakanda once again?

Black Panther was one of the biggest successes of MCU. Fans were already looking forward to the sequel of the film.

However, the tragic passing of Chadwick Boseman, the new cast for the role is still unclear.

Ryan Coogler would be returning to the director’s chair for this film as well. We’ll meet pretty much the entire cast of the first film and some more. Tenoch Huerta could be playing an unnamed villain of the story.

After the much-loved 2018 movie Spiderman: Into the Spiderverse, Sony is set to release Across The Spiderverse Part 1.

Don’t get confused by the title. It would certainly be the sequel of the first movie. We would come across Miles and Gwen again to their new adventure.

The trailer shows them traveling into the hexagonal multiversal portal. The trailer also shows something that many of you might have missed. The frame ‘Meanwhile In Another Universe’ flickers to the Hindi version.

So the movie might be referring to Indian Spiderman from Comics.

After a billion-dollar superhit film Captain Marvel, its sequel was long-awaited. Marvel announced that The Marvels would be the first release of 2023.

Brie Larson will share the screen with Teyonah Parris as Monica Rambeau from WandaVision. Alongside these two, Iman Vellani (The main star of Ms. Marvel from Hotstar sitcom) would be seen in a supporting role in The Marvels.

The storyline is still very unclear. However, it might take place in modern times.

Joining the team of Spiderman villains Venom and Morbius is another marvel comics villain- Kraven The Hunter.

Kraven was already seen in various Spiderman adaptations including Spiderman- The Animated Series and The Spectacular Spiderman. Sony had been intending to bring the villain into the picture for a long time. Finally, Sony confirmed the release date of early 2023. For now, it’s not clear how Kraven will be brought from Sony to MCU.

After a bit of controversy, the threequel of the Guardians will release in 2023. We’ll meet the entire Guardian team again, including Gamora. So the storyline would certainly shed light on Gamora’s 2014-self returning in Endgame with everyone else.

Before this conclusion to the Trilogy, Disney would be releasing the Holiday Special in 2022 for the Guardians Team. Not to mention the team would also be playing part in Thor: Love and Thunder.

Marvel is all set to release Ant-Man And The Wasp: Quantumania next year. The main characters of the first film, Scott Lang, Hope Pym, Hank Pym, and Janet Van Dyne, would return.

Apart from that, the movie will unfold a storyline for New MCU villain Kang The Conquerer whom we met in Loki season 1.

That’s the list of upcoming Marvel movies with the release dates. Among these movies, Marvel will also release sitcoms on Hotstar. She-Hulk, Ms. Marvel, Loki Season 2, and some more. Make sure you catch up on that.

So, Which movie are you more excited about? Get ready to scream and cheer in theatres as this year is going to be adventurous.